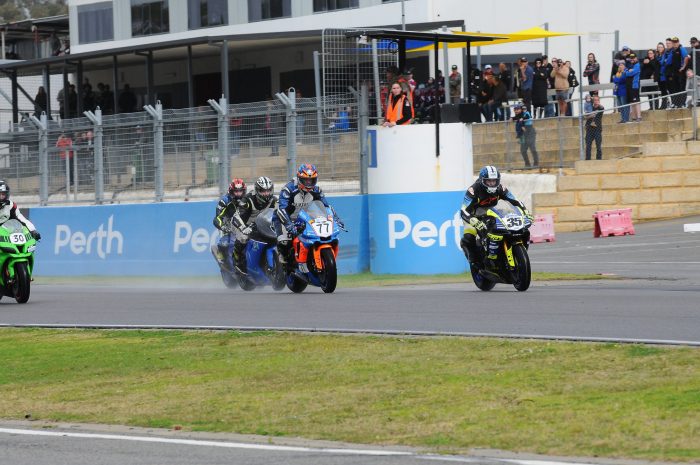 Competitors are hoping that the weather conditions are an improvement on the last round held in May which started with a dry track for practice but as the day progressed the rain came down.

At this round the Golden Era historic class joins the Club with a good strong field of 20 riders with some familiar names from the past. One such rider is Jamie Boland who was an impressive superbike rider some years back, this round riding a GSXR 750. Boland along with Josh Mathers (FZR1000), and Paul Joshua (GSXR750) would have to be some of the favourites to watch.

Racing on the day will commence at 10.45am with the ‘B Grade’ series race sponsored by City Discount Tyres with Rob Fannin (Motorcycle Assist Yamaha R1) taking out the six lap race after taking the lead mid thru. Second was Paul Joshua (Dave the mighty legend Yamaha R6) with first round winner Adam Parsons (Triton Roof Plumbing Triumph Daytona 675) in third place.

Series Points: A Parsons 43, S Blount 33, S McHale 32, K Harrison 26, R Fannin 25, P Joshua 20. Both McHale and Harrison will miss this round having traveled to NT for the Terra race week.

The premier class of the day –the Triton Electrical Superbike Championship will see the return of Sam Clarke (Suzuki GSXR 1000RS36/ Rick Gill Motorcycle) having now fully recovered from wrist surgery. Clarke will be super keen to gain maximum points on the day and try and claw back a podium finish in the overall Championship. Round 2 saw brothers Cameron and Ben Stronach battle it out for the race wins with younger brother Cameron Stronach (Motorcycle Movers Ducati Panigale) taking out races 2 and 3 with Ben (VRT Signs Yamaha YZF R1) taking the early lead and first race win of the day and following up with two second placings. Adam Senior (Senior Engineering Yamaha R1) took the early lead in race 1 in wet conditions but was soon to be overtaken by both of the Stronach brothers. Senior finished in third. Race 2 saw the younger Stronach win from brother Ben with Rob Fannin (DCI Yamaha R1) in third place. A hard charging Senior had led the race briefly before sliding out at the left hander, he remounted and managed a gutsy finish in fifth place. Race 3 and it was Cameron Stronach who greeted the chequered flag at the end of the race taking the round win ahead of brother Ben and Adam Senior.

The Cully’s Yamaha Supersport Championship saw Scott Topping (GoMoto Store Yamaha R6) return to racing for the first time in 2021 and go home with the round win in a very competitive field. He took the win in the first race ahead of the 2020 Champion Tommy King (Keen Edge Construction/AS Racing Kawasaki ZX-6) and Adam Parsons. Race 2 and Topping took the win again ahead of the 2020 runner-up Bronson Pickett (Chain Reaction Motorcycles Yamaha R6) with Parsons again in third place. King finished in 6thplacehaving been pushed wide into the sand at T1 from the start. In the final race Pickett took the win from Paul Joshua and Lachlan Hickey (JB Racing Kawasaki ZX-6). King was fourth with Andrew Biffen (GoMoto Store Yamaha R6) fifth and Topping rounded out the top six. Topping won the day with 65 points second was Pickett with 62 and third was Joshua on 53 points. With just one point separating Tommy King from the championship leader, Bronson Pickett King will be pulling out all stops to gain maximum points and take the lead.

Round 2 of the GoMoto Store Production Championship saw Ethan Thompson (JB Racing Kawasaki Ninja 300) take his maiden win in the class in race 1 ahead of Jordan White (GoMoto Store Ninja 300) and William Wasley (Banhams WA Yamaha R3). Wasley took the wins in the other two races with Thompson one of many riders during the day to crash out at ‘Skyline’ in race two. White was second in race two with Jayden Martin (Aussie Moto Engineering Yamaha R3) in third place. In the final race it was Wasley again that showed the rest a clean pair of heels ahead of Martin and White. Wasley was the round winner with 68 points. White was second with Hannah Stewart in third place overall.

The Professional Printers Sidecar Championship field has reduced considerably due to some bikes still being repaired after the fairly dramatic incident in the basin last round. Dillan McDermott/Grady Norris continued on their winning way with an all the way win in the first race, second were Graeme Evans/Robert Dillan with Murray Stronach/Steve Marshall third. The second race saw McDermott/ Norris again get the hole shot and they were the only outfit to complete the first lap with the remainder of the field stopping to assist the outfit of Stronach/Marshall that flipped exiting T6 after another outfit spun and they were hit in the melee. Round 3 this Sunday will see speedway sidecar ace Darren Nashand passenger Ash Shields (RHR Kawasaki 1000) front the starter and should take it up to Dillan McDermott and passenger Grady Norris

Lunch break from 11.24 to 12 noon approximately followed by plenty of action from Superbikes, Supersport 600, Production, Clubman, Golden Era and Sidecars.

NEXT ROUND AUGUST 29 –WANNEROO RACEWAY 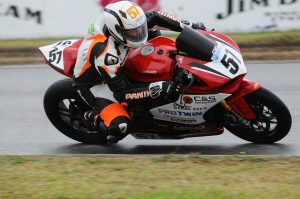 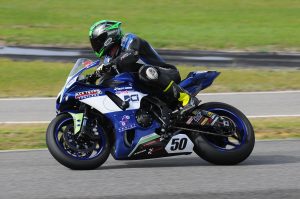 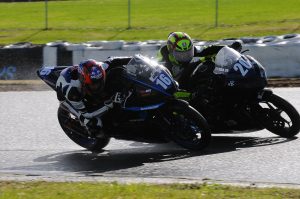 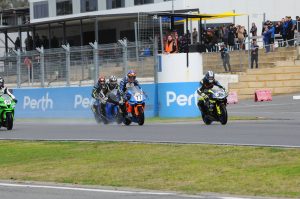