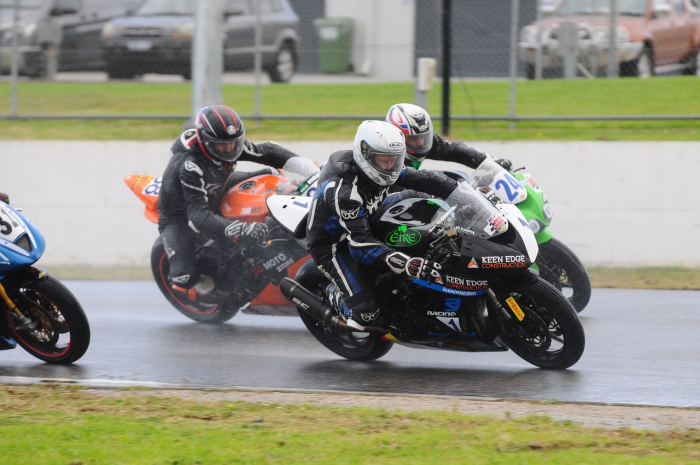 Sunday 23rd May saw the WA’s road racers gather at Wanneroo Raceway for the second round of the 2021 AGV Helmets Australia State Road Racing Championships. With the weather forecast for heavy rain and strong winds for the day, riders were pleasantly surprised when practice got underway with an almost dry track and relatively sunny conditions. All of practice was run in fine conditions.

The Professional Printers Sidecar Championship saw a small field greet the starter with the outfit of Dillan McDermott/Grady Norris with an all the way win in the first race. Second were Graeme Evans/Robert Dillan with Murray Stronach/Steve Marshall third. The second race saw McDermott/ Norris again get the holeshot and they were the only outfit to complete the first lap with the remainder of the field stopping to assist the outfit of Stronach/Marshall that flipped exiting T6 after another outfit spun and they were hit in the melee. In the restart only McDermott/Norris and Graeme Evans/Robert Dillan fronted the starter in a race again dominated by McDermott/Norris taking the win.

The Triton Electrical Superbike Championship Race 1 was run in wet conditions and it was Adam Senior (Senior Engineering Yamaha R1) who took the early lead, before he was passed by both of the Stronach brothers. Ben Stronach (VRT Signs Yamaha R1) took the win with younger brother Cameron Stronach (Motorcycle Movers Ducati 1299Panigale) in second place. Senior finished in third. Race 2 saw the younger Stronach win from brother Ben with Rob Fannin (DCI Yamaha R1) in third place. Senior had led the race briefly before high-siding out at the left hander, he remounted and managed to finish in fifth place with a damaged bike. Race 3 and it was the younger Stronach who greeted the chequered flag at the end of the 7 lap journey ahead of brother Ben and Adam Senior. Cameron Stronach took the round win with 70 points. The much anticipated return of Sam Clarke did not eventuate. He practiced and then, due to the weather conditions and the fact he has another operation on his broken wrists scheduled for next month, decided to pull out of the meeting.

The Cullys Yamaha Supersport Championship saw Scott Topping (Yamaha R6) return to racing for the first time in 2021, and go home with the round win in a very competitive field. He took the win in the first race ahead of the 2020 champion Tommy King (Keen Edge Construction/AS Racing Kawasaki ZX-6) and Adam Parsons. Race 2 and Topping took the win again ahead of the 2020 runner-up Bronson Pickett (Chain Reaction Motorcycles Yamaha R6) with Parsons again in third place. King finished in 6th place having been pushed wide into the sand at T1 from the start. In the final race Pickett took the win from Paul Joshua and Lachlan Hickey (JB Racing Kawasaki ZX-6). King was fourth with Andrew Biffen (GoMoto Store Yamaha R6) fifth and Topping rounded out the top six. Topping won the day with 65 points second was Pickett with 62 and third was Joshua on 53 points.

The GoMoto Store Production Championship saw Ethan Thompson (JB Racing Kawasaki Ninja 300) take his maiden win in the class in Race 1, ahead of Jordan White (GoMoto Store Ninja 300) and William Wasley (Banhams WA Yamaha R3). Wasley took the wins in the other two races, with Thompson one of many riders during the day to crash out at Skyline. White was second in race two with Jayden Martin (Aussie Moto Engineering Yamaha R3) in third place. In the final race it was Wasley again that showed the rest a clean pair of heels, ahead of Martin and White. Wasley was the round winner with 68 points. White was second with Hannah Stewart in third place overall.

The Senior Engineering Junior Road Racing Championship was cut to two races due to the atrocious weather late in the afternoon. Ethan Thompson (Snap Fitness Yamaha R15) won both races ahead of Calvin Moylan (Major Luck Lottery Centre Yamaha R15) with two second places. Bruce Oliver (Yamaha R15) and Jack Dowling (BanhamsWA Yamaha R15) shared the minor placings.Well done to all competitors, it was a tough day in mixed conditions! Hopefully those who came off are feeling okay and will be back at the track soon!

Our next race round is Round 3 of the State Championship on Sunday 25th July at Wanneroo Raceway! 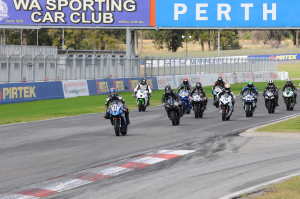 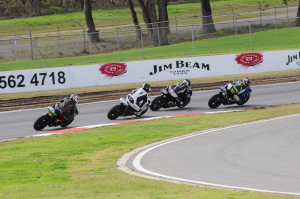 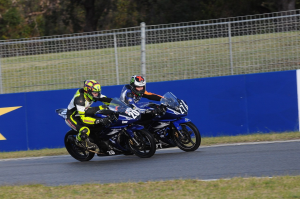 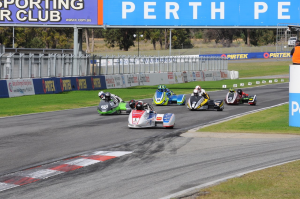