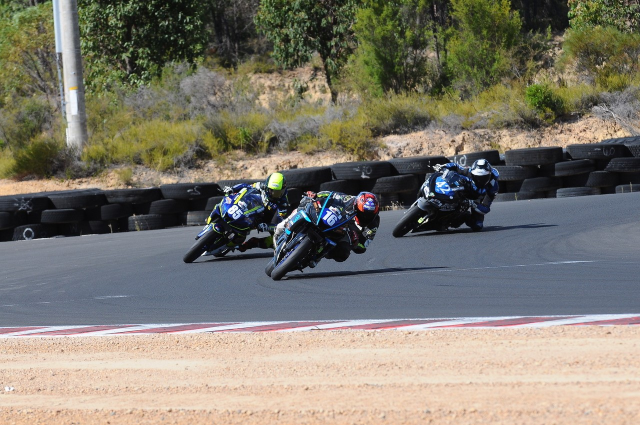 The race day program will cater for Superbikes, Supersport, Production, Sidecars, Clubman, B-Grade Series and, for the second consecutive meeting, we will be joined by the boys from HCMC for the Golden Era class.

In the Triton Electrical Superbike Championship will see Sam Clarke (RS36/Rick Gill Suzuki GSXR1000) starting from pole position for the first race of this round, and judging by his performance in round three he will be hard to beat. Having said that any of the top five are more than capable of winning races or the round. His main opposition will come from Cameron Stronach (Motorcycle Movers Ducati Panigale), Ben Stronach (VRT Signs Yamaha R1), Adam Senior (HydroQuip Yamaha R1) and Ralph Mammoliti (TwoFour Motorsport Kawasaki ZX10).

In the C Grade Superbike class Rob Fannin leads on 201 points from Ray Kleyn 189and Anton Jones 134.Warren French took out 3rdoverall last round and could make a move on the front running C grader shaving only recently stepped up to Superbikes.

The GoMoto Store Production Championship will once again be a battle of the ‘young guns’. Jordan White (DJ White Contracting Ninja 400), Jayden Martin (Aussie Moto Engineering Yamaha R3), William Wasley (Dovers Automotive Yamaha R3) and Ethan Thompson (JB Racing Ninja 300) are the front runners, all capable of winning races. Calvin Moylan (Major Luck Lottery Centre Yamaha R3) will undoubtably be better for the run in round three and Abbie Cameron (Ozsteel Design Yamaha R3) joins the field for the first time. Also running are three 125GP bikes with David Manson (TURN 1 Motorsports Honda RS125), Mark Laing-Hughes (Honda RS 125) and Tom Hatton (Tom Hatton Racing Honda RS125) doing their best to keep the ‘young guns’ honest.
Round 3 unfortunately did not carry points due to lack of numbers for a Championship, but should be good to go this round.

In the Professional Printers Sidecar Championship a field of eight runners have entered, so things are looking up for the class after not having enough entrants for championship status at Round3! A few outfits are missing this round, with the Nash/Shields combo out with a prior family engagement, and the outfit of Gary Cushnahan is still being repaired after the melee in the Basin at round two. Dillan McDermott will be joined by passenger Corey Blackmanand is keen to set a new lap record on the day. Missing from last round Graeme Evans/ Robert Dillon will be keen to increase their points tally–only 20 points off the leadersbut could find pressurefrom father-in-lawMurray Stronach and Steve Marshall combo. Returning tothe track after a long break away is young Sam Watson and passenger Eamon Hegarty, Veteran Mick Robbins/Karen Dore will be joined by Ollie Onesti/ Mat Young and brothers Morgan and Dion Marshal.

The Rick Gill Motorcycles Clubman Class has a strong entry of 17 starters. This round will see awards for both the 600cc and 1000cc categories within this class and always produces exciting racing! Warren French (GoMoto Store ZX10) is the one to look out for this round after taking 3 seconds last round, newcomer Steve Kelly is another to watch taking out 3rd overall last round followed by Chris Fitzgerald. In the 600 category Jason Keenehan will be one to watch as well as Aaron Simonsen and Josh Norman.

Also supporting this round is the City Discount Tyres B Grade series and Golden Era historic class.In the B Grade series Rob Fannin is leading the charge on 50 pts overall from Stephen Blount 48 (non starter rd 4 due to a spectacular dismount at top of the hill last round), Adam parsons is just 5 points behind but another non starter following an injury from the Collie HCMC event recently. Others to step up will be Lachlan Hickey sitting on 38 points from Paul Joshua 36, Ray Kleyn 34 and Sean McHale 32.

A number of Golden Era riders are missing from the grid this round due to a heavy schedule, but last round winner Josh Mathers (4Ward Fabrications FZR Yamaha) will be keen to repeat his wins, Sean O’NeilFZR 1000) Paul Joshua (GSX50)should be front runners but need to watch for RGV250 rider Richard Langdon who placed well at the last round.

Head into Cully’s Motorcycle Centre , Rick Gill Motorcycles and Retro Moto Co, to get your hands on a 2 for 1 voucher for Rounds 4 and 6 at Wanneroo Raceway! 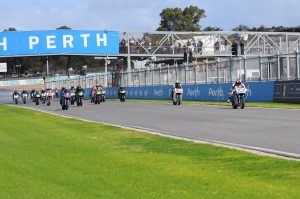 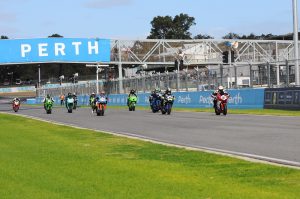