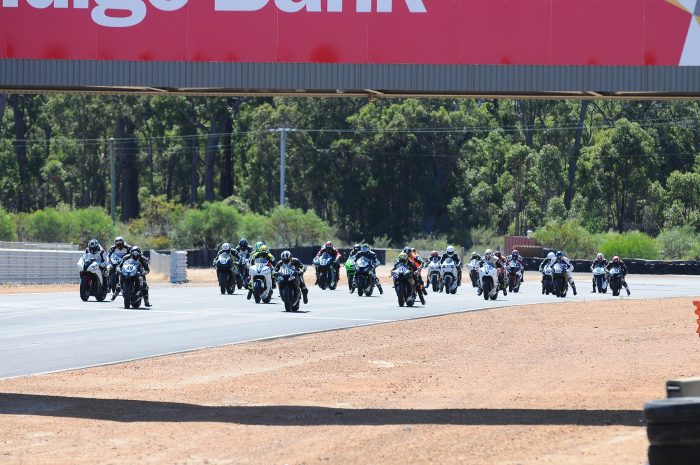 Sunday 21st March saw the Motor Cycle Racing Club of WA state the first of the six round AGV Helmets Australia WA State Road Racing Champsionships which will be run at both Wanneroo Raceway and Collie Motorplex.

The weather was a little on the warm side and the action put on by the riders was even hotter.   Kicking off the action was the ‘B Grade’ Series with Adam Parsons (Triton Roof Plumbing Triumph 675) the winner from Sean McHale (Razor Racing Suzuki GSX-R 1000) with Lachlan Hickey (JB Racing Kawasaki ZX6) in third place.

The GoMoto Store Production Championship provided some of the best racing on the day. This class is predominately made up of previous years Junior racers and three of them stood on the podium after three hard fought races. Jayden Martin (PTT Lubricants Yamaha R3) stood on the top step with 68 points after two wins and a third place. Second was Jordan White (Gomoto Store Ninja 300) with 60 points and third was Hannah Stewart (Igen Racing Yamaha R3) with 51 points.

In the Triton Electrical Superbike Championship the three way battle didn’t quite eventuate with brothers Ben and Cameron Stronach and Adam Senior. In the absence of injured Sam Clarke the three were expected to make the podium theirs, but the Ducati of the younger Stronach expired on the previous Saturday, so it was out with the BMW he rode a few years ago but that too expired with a broken ‘Big End’. Jeff Cameron came to the rescue with his spare Honda, so at least the weekend wasn’t wasted for Cameron. Ben Stronach (VRT Signs Yamaha R1) took the three wins for 75 points Adam Senior (Hydroquip Yamaha R1) kept him honest with three solid second place for 60 points and Raymond Kies (GoMoto Store ZX 10R) in third place overall with 54 points. He also leads the Superbike ‘C’ grade championship with 75 points.

Round 2 will be run at Wanneroo Raceway on Sunday 23rd May.